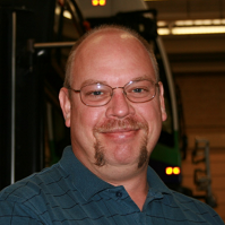 David Renschler is the Public Works Fleet Division Manager for the City of Fairfield and has over 25 years of experience in the fleet industry with most of the time spent in Government service. He is currently responsible for keeping approximately 700 units in the City's fleet safe, serviceable, and on the road. David is currently the Vice Chairman for the Municipal Equipment Managers Association (MEMA NOR CAL). David holds over 20 ASE's and has gained the APWA's Certified Public Fleet Professional (CPFP) designation. The City of Fairfield has also been in the top 100 Government Fleets for twelve years, the APWA Leading Fleets for two years, and received the East Bay Clean Cities Coalition "Clean Air Champion" Award. David has also received the APWA Fleet Manager of the year award for Northern California, SolanoTransportation Authority (STA) Transit Employee of the Year award as well as numerous other local and regional awards for his service in public fleet management.

EV Infrastructure Planning and Execution from the Trenches (Concurrent)

This seminar-- by fleet managers, for fleet managers -- will arm attendees with battle-tested answers from actual implementations. More Info